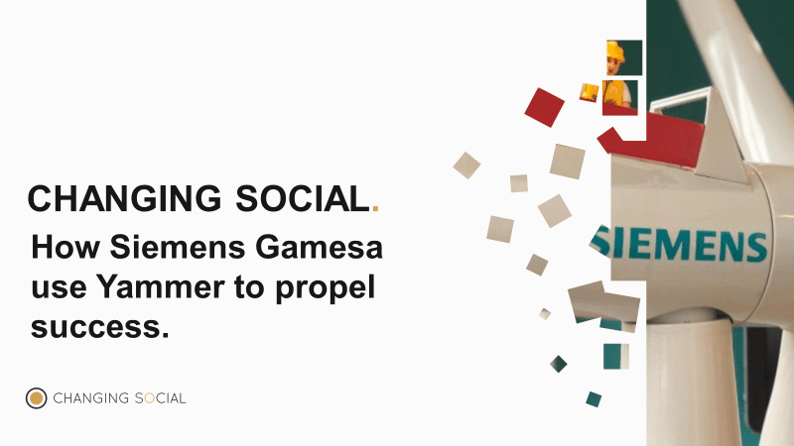 How Siemens Gamesa is using Yammer to propel their workforce forward

Leading the way in the renewable energy sector is Siemens Gamesa, a global giant in the manufacturing, installation and operation of wind turbines, both on and offshore. With a presence in more than 90 countries and over 20,000 employees, Siemens Gamesa has recognised the need to collaborate and communicate to increase productivity and drive innovation in its bid to help tackle climate change.

Before Siemens Gamesa adopted internal social media, employees found it difficult to connect with each other locally and internationally. Dissatisfied workers felt their voice was not heard. Points of contact weren’t clear for those who wanted to raise issues, basic information took weeks to obtain via email and decisions could take months to be implemented. When frontline workers were interviewed about their biggest concerns, “communication” surfaced every time.

Employees implementing decisions on the ground were left in the dark, with limited opportunities for discussions with the decision makers. This invisible wall within Siemens Gamesa caused the leadership team concern – a new approach was needed. Yammer was that approach: the social enterprise service which enabled empowerment and transparency throughout the organisational ecosystem.

Getting Yammer off the ground

Siemens Gamesa already had a social enterprise network in place – ‘SocialCast’ – so introducing a new way of working was more of a transition than a sudden shock. They started by building an internal community who were tasked with understanding Yammer’s functionality and exploiting the benefits they knew ESNs could bring. Additionally, over one hundred groups were created, comprising the different departments, windfarms and offices and the common topics that linked them all. These groups were formed using the experience and use cases from SocialCast. But they knew what they were doing this time. Early on with Socialcast groups were formed on an ad-hoc basis with varying levels of success. Tom Boden from the business transformation team said: “It was like people were building a village, but each building was made from different materials, it was organic, experimental and messy and at the same time incredibly effective. But, with Yammer, we had the opportunity to build in some rigour.” By ensuring that new Yammer groups were consistent in terms of functionality it allowed for a smoother transition process. They called the project #yammertown to highlight the idea of a community.

Yammer was rolled out once the project team was comfortable. Typical adoption activities within the UK involved one-to-one ‘floor walking’ training exercises, getting individuals familiar with the Yammer platform. The greatest challenges were getting people to fully embrace a new way of working. After a few months of patience and persistence, the results started to show.

Since the adoption of Yammer, the social dynamic within Siemens Gamesa has drastically changed. The Service Business Unit in Northern Europe – a collective of nearly 2,000 office and field employees spread across 23 countries and hundreds of windfarms – has seen the greatest impact. This new communication platform broke down barriers between geographies, hierarchies and organisational structures, enabling complete transparency. Information can now be accessed within minutes rather than weeks, with many enquiries already answered on the discussion forums within Yammer.

Empowerment of the frontline workforce allows for a richer internal dialogue. Yammer has blossomed alongside other behavioural initiatives, designed to encourage trust through honest and open conversations. This has enabled levels of collaboration previously impossible – and collaboration impacts the bottom line through immeasurable cost avoidance.

Yammer also managed to build relationships internationally within the organisation. In one example, a Scottish specialist technician uploaded a video to Yammer of himself working on a turbine. Just over 5,500 miles away a Brazilian technician watched the video and noticed his colleague is using a specific tool which they do not have access to in Brazil. Through Yammer they both have a conversation about sourcing the tool to improve work efficiency. Yammer enabled these two to communicate and effect a concrete business outcome.

How Siemens Gamesa made Yammer a success

If it were not for Siemens Gamesa’s desire for change after listening to the concerns of their staff, progression wouldn’t have been possible. Siemens Gamesa understood the relationships between teams, functions and staff and knew that there was a need for better visibility of information.

Understanding the need for change is only half the battle. Siemens Gamesa UK managed to successfully adopt Yammer to such an extent that is allowing their workforce to work more autonomously. Its success is having a profound impact in parts of the organisation, especially the UK, with leadership behaviours becoming more visible.

What’s next? Yammer has been a game-changer for the UK service business, but its adoption has not been as deep  across all regions and business units. The success and impact of Yammer on the UK should be real incentive for every division internationally to follow in their footsteps and see that Yammer is not merely a social network. It opens the gates for empowerment and transparency throughout.

Business decision makers need to see the evidence of the positive impact Yammer has had. On a global scale, this will be a challenge and it will take time but the obvious tangible and intangible benefits Yammer has had in the UK should be proof enough for the rest of Siemens Gamesa and any large organisation hungry for change.

Skip back to main navigation